I’d just turned 18 and like many Scotsmen was getting a full highland outfit to mark my “coming of age”. My younger sisters clubbed together to buy my sgian dubh and, having always been fascinated by knives and craft, I was really excited to finally get my hands on this symbol of Scottish manhood.

With apologies to my wonderful sisters, I remember trying to hide my disappointment as I held the machine-produced plasticky thing in my hands, with a blade that I could have bent with my teeth and its fake ‘Cairngorm’ stone.

It was no sadness to loose the dubh within a year.

After uni  I spent a gap year in the north west of Uganda working on Church-run agricultural project. On a visit to the nearby River Nile, I purchased a lovely locally made knife, fashioned from an old lorry spring. I learned later that when the British colonised Uganda, they banned local blacksmiths, partly to dismantle local weapon making but also to create a market for British-produced ironmongery.

My new knife was nothing special to look at – but it was real; made by a real craftsman from honest wood and steel. It was a half-decent knife and it had a story. I wrapped the blade in bit of cardboard and wore it with pride as my sgian duhh for over a decade (including at my wedding).

The week after my wedding I was in the wonderful Orkney Isles on my honeymoon. My love of natural materials and real craft took me to visit several Orkney artisans, including to the workshop of the famous silver jeweller Sheila Fleet. The place was so quiet that we were able to chat to Sheila – and as our conversation developed she asked me what kind of craft I was interested in and what I liked making.

I confessed to having minimal craft skills myself – but in a throwaway comment mentioned that perhaps in my retirement I might have a go at making a couple of sgian dubhs. ‘I think you should’ she said. A seed was sown. 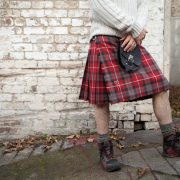 The seed germinates
Scroll to top